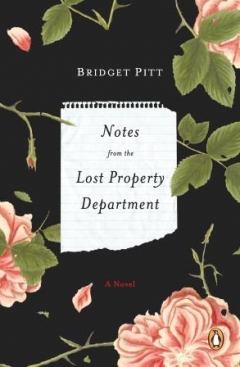 Memories are like films about ghosts.⃰  And, the protagonist in Bridget Pitt’s Notes from the Lost Property Department, Iris ‘Izzie’ Langley, is haunted by them. The 57-year old suffered a massive brain injury when she fell off the Drakensberg’s highest peak, the Amphitheatre, during a hike with her family as an 11-year old. Izzie doesn’t remember the incident, or why she “ran off without explanation” before her fall. The day changed her forever. That’s when her personal monsters, “The Draken”, became her constant companions, the things that have “scrambled” her brain and emotions.

Izzie’s mother, Grace, defied the doctors who said her daughter should be placed in a home for the disabled. Dedicated and determined, she ‘re-taught’ Izzie forgotten childhood  memories, how to walk, and talk. Yet, Grace has always remained vague about what led to Izzie’s fall, casting a shadow over their relationship. Just as a frail Grace, now 83, decides perhaps it’s time to reveal the truth, she has a stroke, and the roles are reversed. It’s up to Izzie to look after her mother, whose memory is now as broken as her daughter’s.

The book is divided into Izzie’s present-day experience of looking after Grace, Grace’s inner conflict just before her stroke, and flashbacks of the lead up to the accident. Slowly, the truth emerges, not just about Izzie’s fall, but of a mother and daughter being forced to face their demons. For Grace, it’s her fear of what her daughter will think when the secret of her fall is revealed. For Iris, it’s making peace with what’s happened to her. “Sometimes it’s hard to accept we are the architects of our own happiness or despair,” Izzie’s partner, Tom, tells her. “Maybe believing that your injury has snatched wholeness away from you absolves you of taking responsibility, of taking ownership of yourself. Or may you’d rather believe you are a damaged genius than accept your limitations as part of who you are.”

46 years after her near-death, Izzie impulsively decides to take a wacky road trip back to the scene of the accident. Her posse includes her teenage nephew, Noah, her mother, the latter’s security guard friend from her old age home, and a nurse. It is in the majestic and breath-taking Drakensberg itself that years of secrets and guilt are finally laid bare, and a mother-daughter relationship will be either destroyed or saved.

Notes from the Lost Property Department is a funny and quirky story about family, but also a tender and absorbing look at brain injury. It’s an examination of identity, of what makes a person what she is, and about her place in the world.

*Listen to my interview with the author below.

“The Draken also left some version of themselves in her brain: a raging chaos that clouded her mind for months after the accident. This caused her thoughts and sensations to fragment and slide over each other like writhing scales wreathed in smoke, and any but the gentlest sounds to coalesce and expand into a deafening roar, which could only be drowned out with a roar of her own.

Iris tried to explain this to her partner, Tom, some twenty years after her fall. When she saw Tom’s expression, she quickly added, ‘It’s just a story,’ and laughed.

Tom was not fooled by her laugh. ‘Then you should create another story about yourself,’ he said. ‘One that is more rewarding.’

‘A story doesn’t own you – when you don’t think about it, it doesn’t exist. You keep it alive by obsessing over it. It’s not mystical, it’s biological. The more you practise a thought, the strong the neural pathways leading to it. So practise a different thought.’

So Iris worked diligently at making up different stories, about herself battling the Draken and coming out all the stronger for it. But, however much she has tried to vanquish or tame it, when there is a crisis – sometimes even quite a small one, like a burst pipe or a bird trapped in the house – the Draken returns with its sickening tilt of smoke and scales, routing all sensible solutions.”

Notes from the Lost Property Department is published by Penguin Books.

⃰ Line stolen from the song Mrs Potter’s Lullaby by The Counting Crows.

I interviewed Bridget Pitt about what inspired this book, and what’s she’s up to next.

One thought on ““Notes from the Lost Property Department” – a novel about secrets, broken memories, and defining moments.”