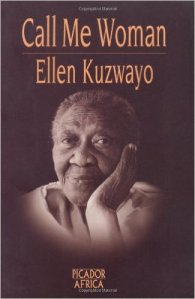 In 1985, social worker, teacher, community leader, and political activist, Ellen Kuzwayo published a brave autobiography, detailing the conditions under which women lived before and during Apartheid. The book, Call Me Woman, is a story about loss, pain, courage, and dignity, not only as experienced by one woman in South Africa, but for millions. Author Nadine Gordimer writes in the preface: “Ellen Kuzwayo’s life has been lived as a black woman in South Africa, with all this implies. But it is also the life of that generation of women anywhere — in different epochs in different countries — who have moved from the traditional place in home and family system to an industrialist world in which they had to fight to make a place for themselves.”

The story of late ANC MP, Ellen Kuzwayo, is one that reflects the reality of black women in South Africa for the better part of the twentieth century. Ellen was born in 1914 on a farm in the Orange Free State, a piece of land that had been in her family’s possession for near on a hundred years, but was dispossessed in 1974 under the Group Areas Act. Born before Apartheid, Ellen managed to avoid bantu education, and attended excellent schools and colleges. But her happiness was shattered when she married an abusive man, with whom she had two sons. Five years after her wedding, she made the tough decision to flee to Johannesburg, in order to protect her own life. Ellen’s sons, however, had to be left behind, something that left her heartbroken. In 1947 she filed for divorce, something that was frowned upon in the Christian community she belonged to. Because of the laws at the time, even after the breakup of her marriage, her sons still wouldn’t be placed in her custody.

It was in Johannesburg that Ellen became active in the community and in politics: she was appointed secretary of the ANC Youth League in 1946. She studied to become a social worker along with Winnie Mandela and Pumla Finca. In the 1960s Ellen became a leader in the Young Women’s Christian Association (YWCA), which fought racism and discrimination against both black people, and women. She describes her five month-long imprisonment at the Johannesburg Fort (now part of Constitution Hill) for her association with Steve Biko’s Black Consciousness movement. The dehumanisation of black female prisoners there, is shocking; they weren’t allowed underwear or sanitary pads for when they menstruated. But following a campaign by Ellen and others, this changed. During her imprisonment, Ellen also describes an extraordinary and frank meeting she had with then-Minister of Justice, Jimmy Kruger.

Call Me Woman challenges the racist and patriarchal views that designated black women as unproductive, lazy, and unintelligent. African women faced ‘double discrimination’ due to their skin colour, and their gender. Under Apartheid, adult women were humiliatingly classified as ‘minors’, meaning any legal decisions about their lives, including the ability to travel, had to be approved by a male family member.

What makes this book different to so many other similar ones by more ‘prominent’ female struggle heroes, is that it was written during the zenith of Apartheid. In 1985, when the book was published, the government imposed a state of emergency, giving police more powers to violently suppress uprisings. Ellen’s experience of this is written in present tense, something that has a greater impact on the reader than a look back at the past.

In moving and humble language, Ellen describes how she and many others sometimes felt helpless in their fight for freedom, and the battle against bitterness and hatred. “Much as we accepted our shortcomings and limitations as individuals, we still believed that a contribution by every member of the black community, no matter how humble or small, can add to the efforts and contributions of many others. The results would be measured at the end. To give and fold our hands is to accept death before it takes over, defeat before the enemy proves his worth,” she writes.

Ellen Kuzwayo challenged not only racisim, but deep-rooted sexism, both in African and Western culture. Even as she embraced women’s emancipation, she didn’t bow to becoming Westernised; as, Gordimer says, she Africanised the Western concept of women. With this book, Ellen became the first black writer to win South Africa’s premier literary prize at the time, the CNA Award.

This is a moving, heartbreaking, and inspirational story not just about hardship. Bessie Head, in the foreword, writes that despite the human suffering documented in the book, “there is a sense of triumph, of hope in this achievement…”

“The black women in South Africa have shown outstanding tenacity against great odds. We shall never give in to defeat. Today [in 1985] we remain determined, like the women of our community of previous generations, who have left us a living example of strength and integrity… The commitment of the women of my community is my commitment — to stand side by side with our men folk and our children in this long struggle to liberate ourselves and to bring about peace and justice for all in a country we love so deeply. The old Setswana proverb has come alive with a fresh meaning for me at this point: Mmangoana o tshwara thipa ka fa bogaleng. It means: ‘The child’s mother grabs the sharp end of the knife.’”

One thought on “BOOK CLUB READ – Ellen Kuzwayo’s “Call Me Woman” is as relevant today as in 1985.”